Less than 4.5 percent of Slovenian companies meet the criteria for fast-growing companies. Yet these companies have a huge impact on the national economy.

They are included on lists published by international media companies like Inc. Magazine and the Financial Times, while the best hypergrowth companies receive the national Gazelle award.

Hypergrowth companies are rare phenomena that leave a huge impact. They create more jobs than any other type of businesses and are sources of innovation and dynamism in the economy. According to the official data published by the Agency of the Republic of Slovenia for Public Legal Records and Related Service (AJPES), 5,347 Slovenian companies meet the criteria needed to be fast-growing companies. These 5,347 firms represent only 4.4 percent of the businesses in Slovenia yet employ 16.4 percent of the total workforce and made over 20 billion euros of revenues in 2018. To be included on the AJPES list the company must double its revenues in five years and meet a set of other financial criteria. The list also includes 159 companies that have had constant fast growth over a period of 10 years or longer.

The most well-known survey of hypergrowth companies is published by US magazine Inc. The latest edition of the list, with 5.000 of the fastest growing companies in Europe, includes 56 businesses from Slovenia. Most of these companies are operating in engineering, technology or logistics. The best placed in Bravia Mobil, a small motorhome maker in 56th place and with a staggering growth of 3.299 percent in the last three years. Some already established Slovenian companies also made Inc.’s list. An example is Fotona, a global leader in the development and production of laser devices for dentistry and medicine. Fotona’s revenues have grown by 73 percent in the last three years – not too bad for a business that is over 50 years old.

The latest survey of European fast-growing companies was published by the Financial Times in early March. The list of 1,000 fastest growing companies in Europe includes five representatives from Slovenia. These five companies are virtually unknown in their home country – as they are very young and small.

To focus only on growth rate may not be enough to identify the true hypergrowth companies, especially those with a substantial impact on the economy. As stated in a recent article on hypergrowth in the Harvard Business Report, the key element for success in these companies is their ability to scale their business culture. To find the long-term performers among the fast-growing companies, it is not enough to focus on their financials alone. Soft elements like culture and values have to also be considered.

This reasoning has been behind the selection of the Golden Gazelle award since the start of the project back in 2001. The best examples of the fast-growing companies – or “gazelles” - are selected every year not only on the account of their rapid growth but also based on a thorough qualitative analysis of the company, taking into consideration elements like the company’s values and long-term goals. The awards are presented every October. The latest winner of the Golden Gazelle is Virs, a developer of complex automated welding and cutting systems from Eastern Slovenia. Virs is still a rather small company with 25 employees and 8 million euros in revenues. The jury gave the award based on the company’s technological prowess, which should provide for a firm foundation going into the future. The silver award went to wood-floor and laminate flooring manufacturer Alpod, and the bronze to printed circuit board producer MI Elektronika.

It is a well-known fact that some companies thrive even in turbulent and uncertain times. And as the outlook for the global economy is becoming ever gloomier, the importance of resilient hypergrowth companies may be even bigger than normal. 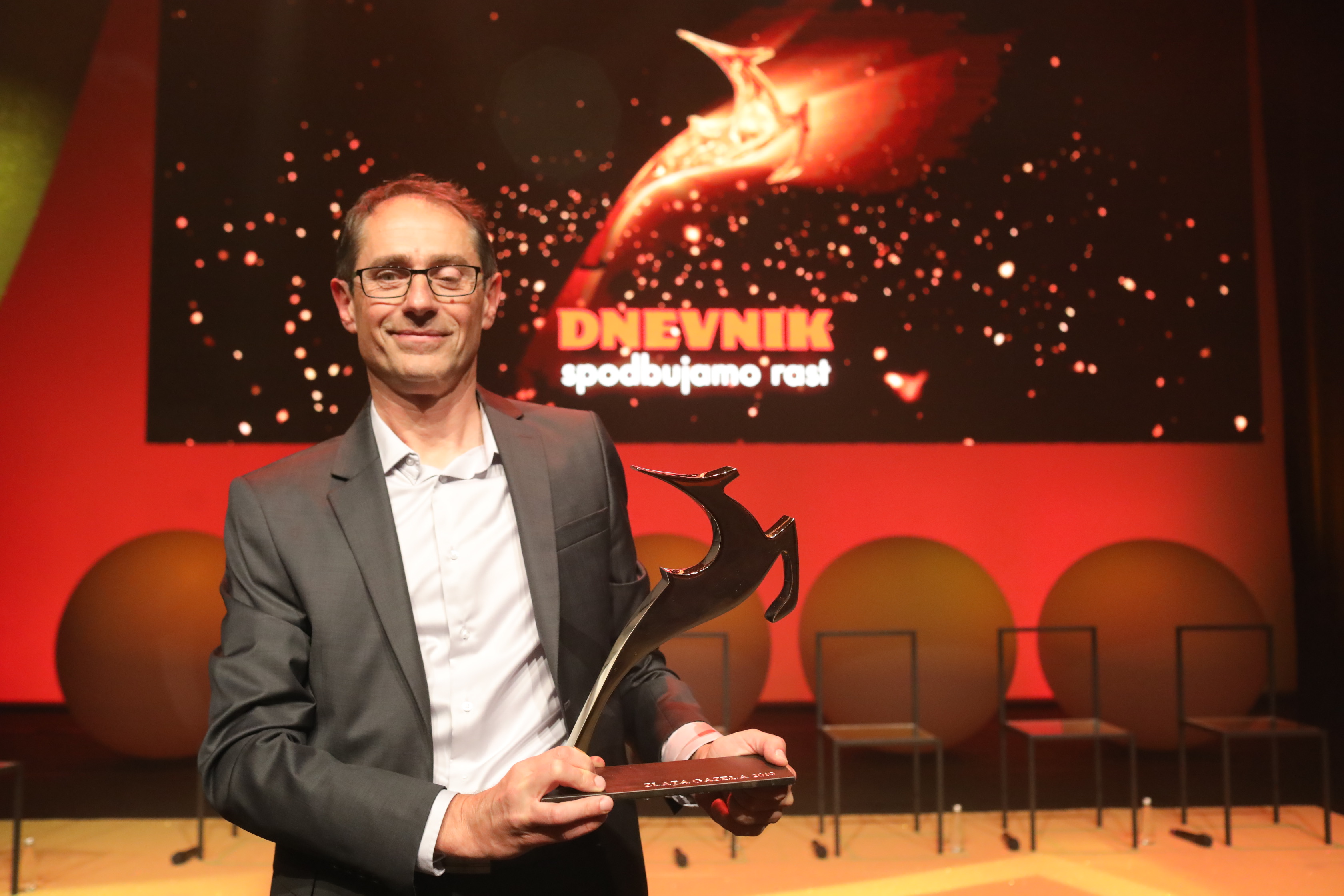 Aleš Puklavec, one of the founders of Virs, receives the Golden Gazelle award for the best fast- growing company in 2019.