Most of Slovenia’s best companies are mid-size. Though less known in the wider public, they operate on a global scale and often play the role of a niche leader. These enterprises are highly innovative and represent a true pillar of Slovenia’s exporting economy.

Midsize companies represent a true backbone of the Slovenian economy. It is not because of total output – they create 23 percent of the total revenues of the national economy – but rather because of the quality. The most frequent winners of various “best” lists compiled by the business press come from 2,163 Slovenian mid-size companies. They stand out in the surveys of the fastest growing companies, best exporters, most innovative companies and so on. And even though these enterprises are usually unknown to the wider public, they are often important niche players in global terms.

One of the most important national associations of entrepreneurs, the Slovenian Business Club (SBC) published in September a list of the best mid-size companies according to their financial results, in particular EBITDA. The company with the highest EBITDA is Plastoform, one of the leading European manufacturers of thermo for mobile plastic materials for various industries, including automotive. Second place was taken by Bia Separations, one of the leading global tech companies developing technology for the filtration of large biomolecules. The company was recently sold to German group Sartorius.

One of the best mid-size companies is also Dewesoft, the winner of the Exporter of the Year 2020 title awarded by the business daily Finance, and the winner of the 2012 Golden Gazelle award. Dewesoft’s leading measurement devices are used by NASA and companies like Siemens, Boeing and Canon. The company’s revenues reached 40 million euros in 2019. One of the previous winners of the Exporter of the Year award – and the best fast-growing company in 2015 – was RLS with around 24 million euros of sales in 2019. Its advanced motion sensors are used in robotics, solar power panels and Airbus planes. Metronik is one of the “Entrepreneurial Stars”, an award given out by Delo, the nation’s leading daily. The company, with 24 million euros of revenues and 160 employees, is a provider of automation systems and IT solutions for industry 4.0 and smart grids. Another Entrepreneurial Star is Cleangrad, the runner-up in this year’s Exporter of the Year survey and a recipient of the business achievement award by the Chamber of Economy and Commerce. The company specialises in integrated solutions for clean areas. Its revenues reached only 15 million euros in 2019, yet Cleangrad is one of the niche leaders on a global scale. Its technology is indispensable in the pharma and body care industries, and is used by companies like Johnson&Johson, Pfizer, Janssen Pharmaceutical, or Mithra.

The Golden Gazelle in 2018 was won by another runner-up to this year’s Exporter of the year award, Mebor. The family business from the alpine part of Slovenia has developed into one of the world’s leading manufacturers of machinery for primary sawing of wood. INEL is a fast-growing company from Slovenia’s third largest town, Celje. It develops print and verify automated machines used in pharmaceutical and other industries. Incom is one of the most innovative ice cream producers, its products receiving awards globally. Hyla is the leading manufacturer of high-end water filter vacuum cleaners.

We could go on. The companies that employ more than 50 and less than 250 employees are considered mid-size within Slovenia’s economy. In global terms, these enterprises would be perceived as tiny. Yet it is not about size, but rather about quality. Many of Slovenia’s mid-size companies are global niche champions and as such a key engine of the country’s exporting success. In that respect Slovenia’s economy resembles Germany’s, with “mittelstand” firms as its most important pillar. 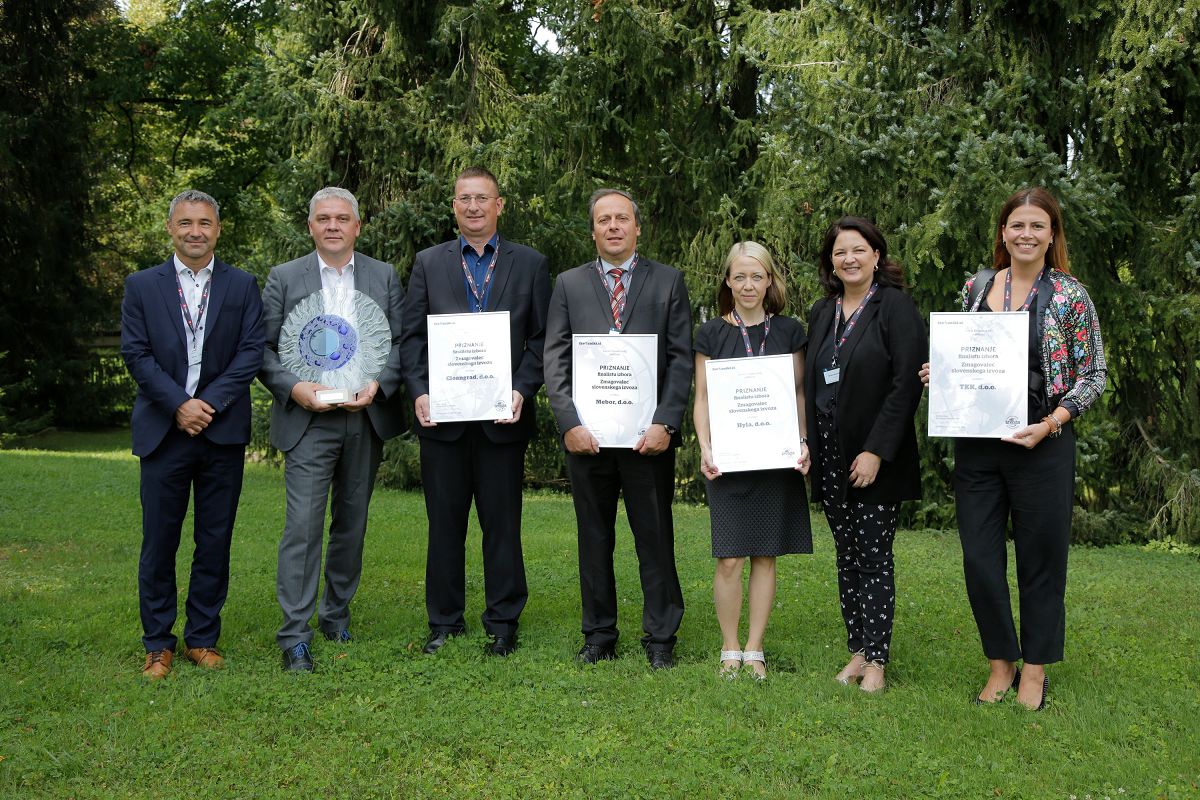 Slovenia’s best exporters in 2020: most of the award recipients are mid-sized.
Photo: Cleangrad